There is enough motivation now showing the necessity of learning models that have a correct causal structure. The famous “Correlation is not causation” quote should ring a bell. Although the research on learning causal structure from observed data has not yet shown its potential. There are certain tasks from causal literature which can still be solved by just using observed data. Specifically, interventional and counterfactual queries can still be answered if we know the causal structure. And, to do that we need the following tools of causal inference popularized by Prof. Pearl.

Tool 1 emphasize the importance of graphical representation of causality using a Bayesian Network. By representing the causal influences using BN, we can leverage the three rules of conditional independences for inference. 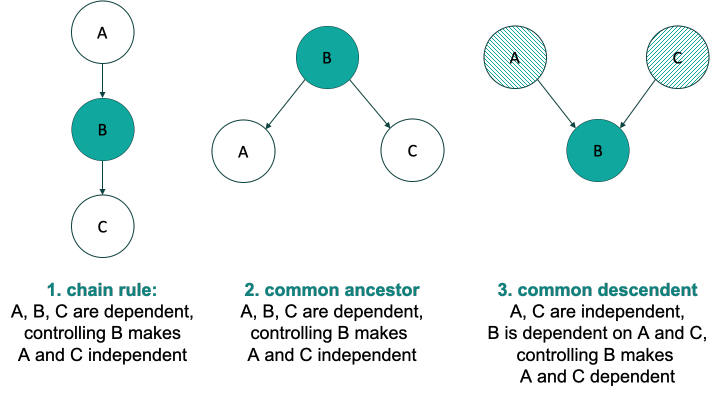 Although very powerful, the BN representation is limited. Only with graphical representation we will not be able to differentiate between $P(y|X=3)$ and $P(y|do(X=3))$. Ferenc Huszár gives a beautiful explanation of the difference between the two in his post on causal inference 1. Given different causal BN and data generated from different distributions as shown in the figure below, we can see that the joint distribution of $x$ any $y$ is identical. Even the conditional probability $P(y|X=3)$ is identical. 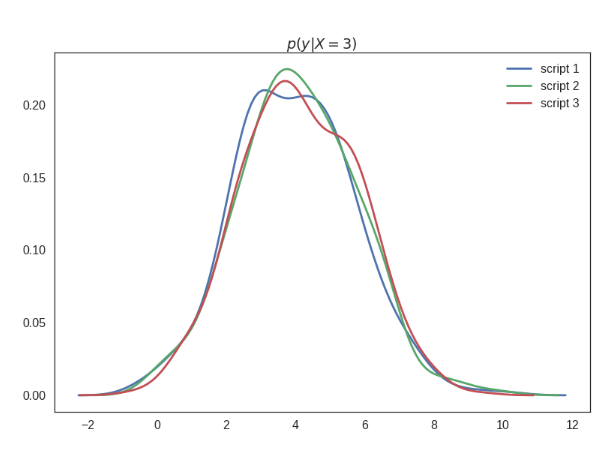 But, what if we force the variable $x$ to take a fixed value $3$ in each of these cases, i.e. intervene on variable $x$? Should we still expect the distribution of y to be same? No. As expected the impact of intervening on variable $x$ has different impact on values of $y$. This is evident in the two distribution plotted below. 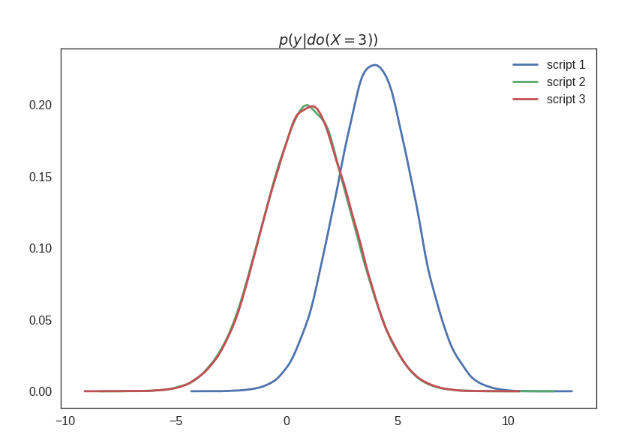 Tool 2. Do-calculus and the control of confounding.

In the above example, intervening on variable $x$ and fixing it to $3$ is like making $x$ independent of all its ancestor. So, we remove all the incoming edges to $X$. Now, Computing $P(y|X=3)$ of the resulting graph will give us $P(y|do(X=3))$ of the original graph. 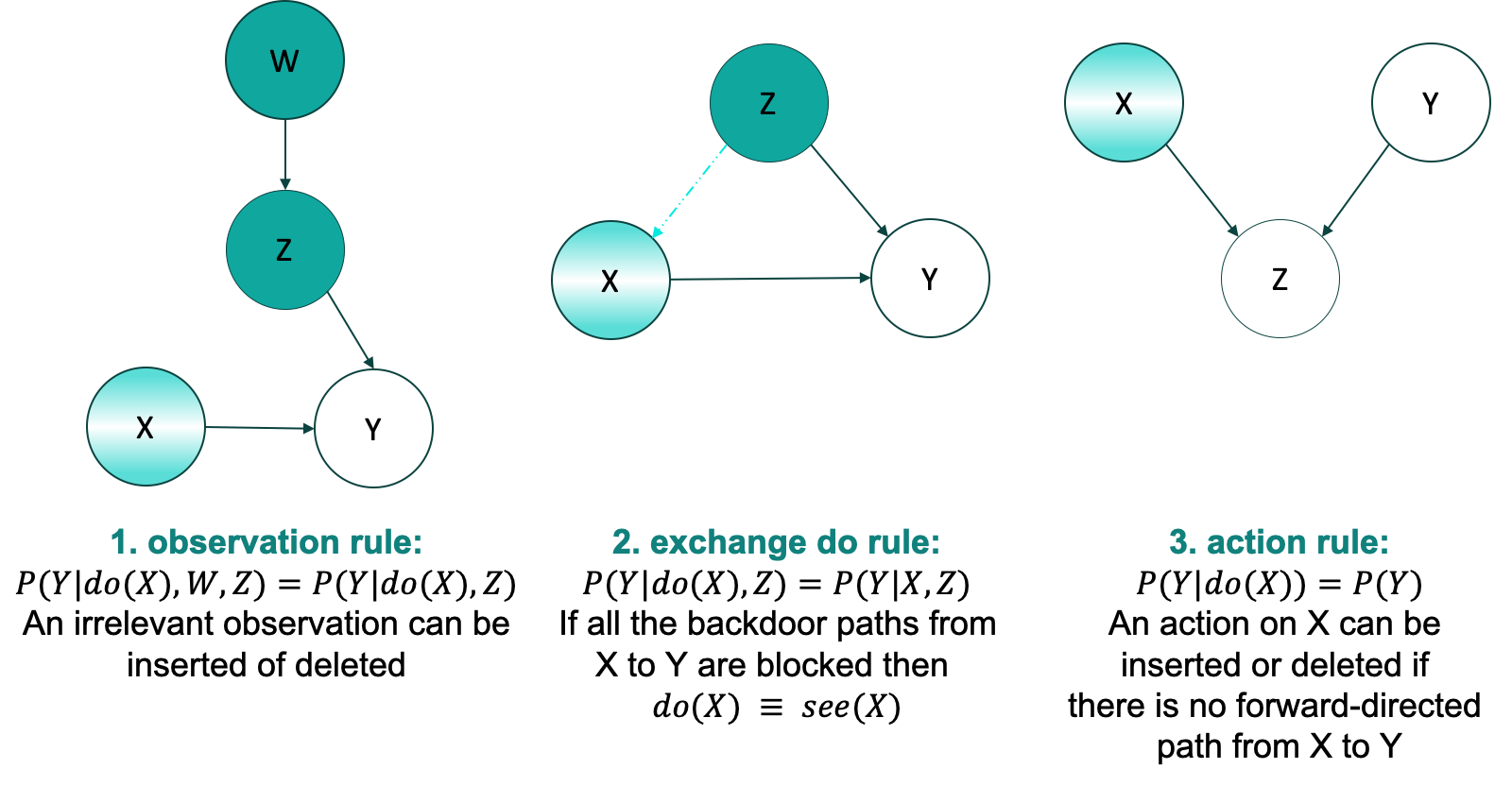 One of the most common adjustment in the causal inference is de-confounding i.e. adjusting for all the common causes (confounders) of two variables. This is the famous backdoor criterion. Back-door path for $X \rightarrow Y$ is any path that ends in $Y$ and has arrow pointing into $X$. To de-confound $X$ and $Y$, we have to block all the back-door path by adjusting for (i.e. conditioning on) variables which either follow chain-rule or common ancestor rule. We have to be very careful to not condition on any common descendent in the back-door path. 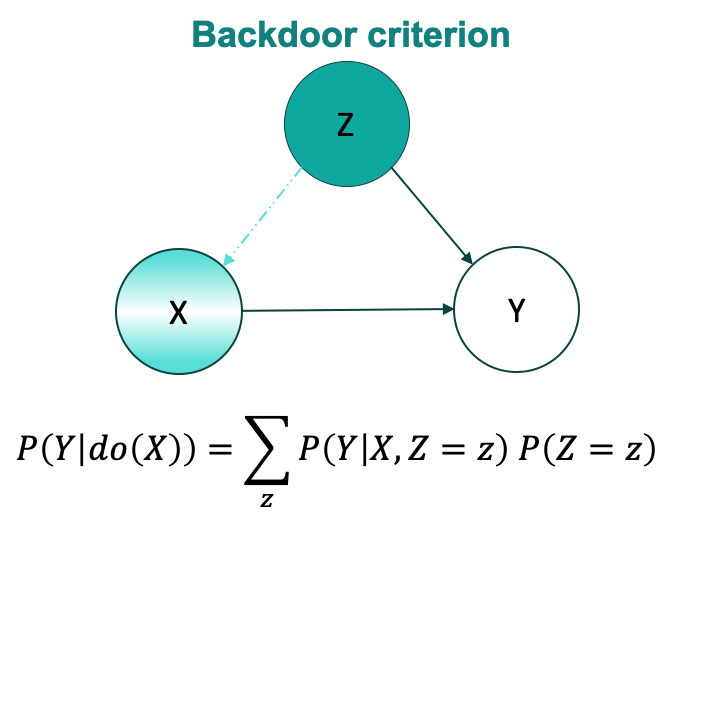 For graphs where we are unable to block the back-door path (say, because of unobservable variable), do-calculus gives us a work-around. This is commonly called the front-door criterion. 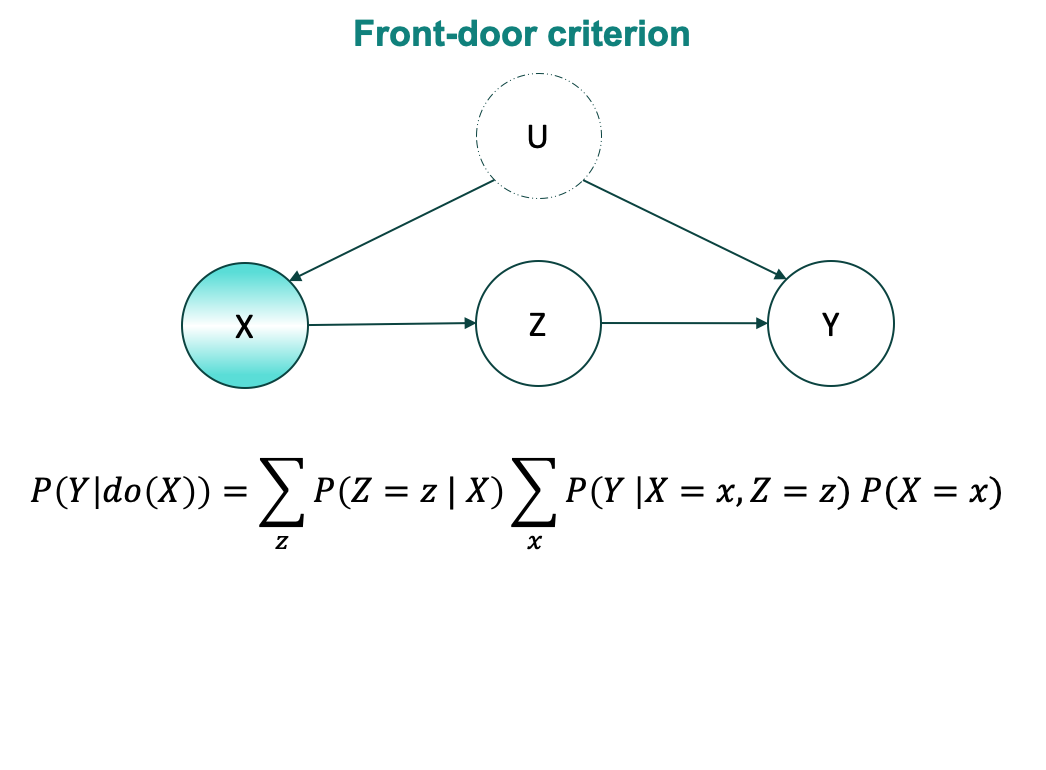 For graph given above, the front-door formula is derived as follows:

Its amazing, to compute the $P(Y | do(X= \tilde{x}))$, we have to sum over all the possible assignments of $x$. With only Tool 1, I would have mostly computed probability by only looking at data points where $X = \tilde{x}$.

Tool 3. The algorithmitization of counterfactuals.

counterfactuals talks about a specific individual/event/scenario.

Counterfactual queries are questions about a parallel universe where one(or few) feature(s) is(are) different for a specific example, not on the whole population. It is a question always asked in retrospection for a specific instance. For example, An interventional question to analyze importance of wearing mask during current pandemic can be asked as “What would be the total number of COVID-19 positive patients, if we banned mask in public?” i.e $P($ COVID_Pos $| , do($ wear_mask $= 0) )$. But a counterfactual question would be “Given that I had worn mask when I went to buy grocery last week and I do not have COVID-19 today, what would have happened if I had not worn mask?” This question is about me, and about a specific instance of not wearing mask. This counterfactual question has to account for every variable which is not a descendent of wear_mask staying exactly the same. So, the fact that I drove to the TomThumb or the cart which I used should stay the same, because in my assumed causal graph, they are not descendants of wear_mask variable. But on the other hand the fact that I washed my hands and face for exactly 12 secs after coming home, and that I entered the spice aisle might change. Because in my causal assumption these are descendent of wearing mask. Hey! I would have washed hands and face for 20 secs if I was not wearing mask and I would have definitely not entered the spice aisle which had like 3 people in there. I would have maintained six feet distance.

So, mathematically the counterfactual query is $P(h_c^*=1|h_m^\ast=0,h_c=0, h_m=1,..)$, where, $h_c$ is Harsha has COVID-19, $h_m$ is Harsha wore mask, and \ast indicates counterfactual universe. So, all the variable that are not descendants of $h_m$ will stay same i.e $h_i = h_i^\ast, \forall i \notin Des(h_m)$. To compute the probability of the counterfactual query, we need more than the do-calculus from Tool-2. We need structural equation models (SEMs) and an algorithm.

I strongly recommend Ferenc Huszár’s post on counterfactuals for more clarity on how the interventional probability $P(Y| do(X))$ is the computation on population, but counterfactuals is for individuals.

Let’s see how we use tool 3 to answer the counterfactual query, “What would Alice’s salary be if she had a college degree?”. This query is from the fictitious employee data reproduced below from The Book of Why. Here, the experience is mentioned in number of years and three levels of education are : 0 = high school degree, 1 = college degree, 2 = graduate degree. The assumed causal graph is also shown below. 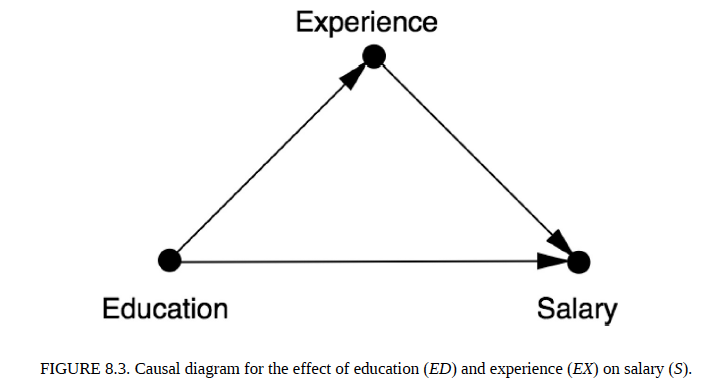 src: The Book of Why

The SEM for this graph will be:

Here, U are unobserved idiosyncratic variables which capture the peculiarity of the individual in question. So, these values are different for each user. For instance, We can think of $U_2$ accounting for difference in salary as some artifact of individuals unobserved characteristics which is independent of level of education and experience (say, time management). In terms of graphical model, we can think of these variables as parents of the variable on the left side of the equation. Note that these idiosyncratic variables do not have incoming arrows. So, given the counterfactual explanation above, these values should remain unchanged in the parallel universe. If we were to do linear regression we would have an $\varepsilon$ instead of $U$ to adjust for the noise. However, the noise is then a random parameter which is not necessarily kept constant across universe. This is where the SEM differ from linear regression.

The SEM coefficients can be estimated from the observed data, much like linear regression.

Now, the algorithm to compute the counterfactual query is these three steps:

Rest of the tools…. to be added later.