Some pointers on Batch Reinforcement Learning and Fitted Q. These were gathered while working on an RL for healthcare project, as part of Advanced RL course by Prof. Sriraam Natarajan.

We have limited knowledge of the MDP. We can discover it by interacting with the system

On the contrary, approaches to solving the Online RL Problem directly, i.e. solving for $\pi$ directly with either value function $V$ or state-action function $Q$ is called Model-free RL.

The simulation environment is not present and complete set of transition samples $\langle s, a, r, s^{\prime} \rangle$ is given and the challenge is to learn without exploring.

Bellman optimality equation for the action-value function ($Q$) is given as:

In the dynamic programming setting, the $Q$ function for optimal policy is represented as:

Q-Learning is a model-free approach to learn the $Q$ function by exploring the environment, i.e. performing actions based on some policy. A table of Q function for each state action pair $Q(s,a)$ is maintained and the table in updated after every action using the running average formula:

With multiple episodes the Q values will eventually converge and the optimal policy might be retrieved from that.

There are several draw backs of the Q-Learning. These drawbacks might be minor in typical reinforcement learning setting where we have simulators. But these drawbacks are serious limitations in the Batch RL setting. In Batch RL, the simulation environment is not present and complete set of transition samples ($\langle s, a, r, s^{\prime} \rangle$) is given and the challenge is to learn without exploring.

As we see it in the figure below, at some point in the top left cell $(1,3)$, agent explored the action of going north and because it landed in the same cell, it updated $Q(s,north)=0.11$ as per the $\max_{a} Q(s,a)$ of that cell during that episode. After that episode, even though the $\max_{a} Q(s,a)$ of that cell changes, the $Q(s,north)$ does not get updated till the agent explores going north. 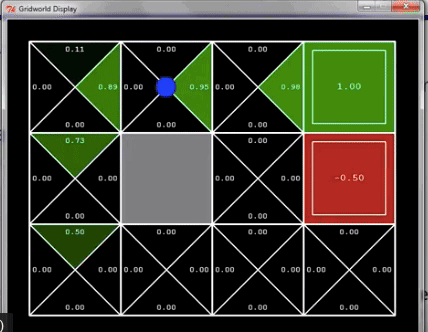 Q-Learning has ‘asynchronous update’ i.e. after each observation the value is updated locally only for the state at hand and all other states are left untouched. In the above figure, we know the value at the Red tile, but the Q value for the tile below it is not updated until we explore the action of going to red tile from that tile.

Similar idea of asynchronous update is also applicable in function approximations where $Q$ function is estimated by a function and at every time step the function is updated using:

This is where fitted methods come in.

This is in principle similar to equations mentioned above, with $f^{\prime}$ as regression value and $\alpha=1$.

Further extensions to the fitted Q approaches have learnt $f$ function as some linear combination of the previous function and regression values.